Many translators especially ones connected with LSP prefer using Trados or other CAT tool as main translation tool. It sometimes could generate issues between developers who use Sisulizer as tool for scan/build and their translators who work with Trados and are not facilitated with Sisulizer. Flexible Sisulizer Exchange feature allows to create packages with included localization resources and special Sisulizer installer for translators, but they often haven’t to much time for learn a new tool. However, don’t worry, if you are developer you do not need to send this package to your translator if he doesn’t prefer this solution. Instead, you can send resources in format compatible with your translator’s tool e.g. Trados. This is an easy and efficient solution. Simply go in Sisulizer to “File” menu and select “Export” menu item. 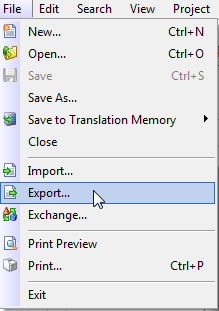 In the open wizard select TMX or XLIFF format. Both formats are common localization data exchange standards and are supported by all modern CAT tools. Sisulizer has extended support for TMX and XLIFF format and allows to save e.g. contexts, translation statuses, row statuses, comments, invalidated or marked flags. 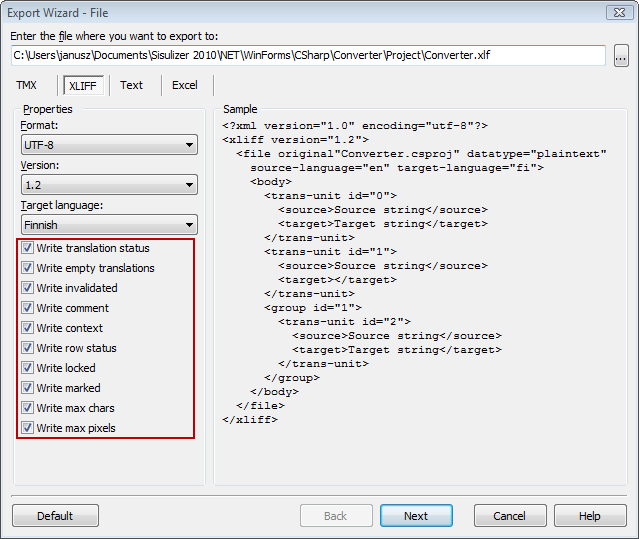 Here is article about optional items saved to exported file. Unfortunately, other tools don’t support all these items, so you may want to uncheck those options. Generally if you keep all options checked, it doesn’t generate incompatibility issues with your CAT tool – they simply don’t read e.g. context, but unchecking above options could reduce size of exported file. Next, your translator can in easy way translate this TMX or XLIFF file in Trados. If you received translated file, use “File” menu -> “Import” (like for exchange package), select import options and import translations to your Sisulizer project.