Sisulizer hasn’t implemented feature for directly merging several projects to one project. However, you can do it with Sisulizer in really easy and flexible way:

1. First, you should add all sources to one project, which belong to second project. You can add these new source items to project via “Add source” UI items available via “Project” menu, main toolbar icon or via context menu of Project Tree.

2. If your second project contains some translation languages unavailable in your targeted project, you should add these languages to this project via “Project” menu -> “Languages” or via “Select target language” dropdown menu on main toolbar.

3. Next, you should use “File” menu -> “Import”. This UI item opens dialog of Import Wizard. In first step you can select imported languages. Of course, you can use here standard Windows keys (Ctrl and Shift) for selecting multiple languages. Clicking on “Next” button navigates you to next wizard step, that is, “Import Wizard – Options”. Here you can find all import options. Below are short descriptions of most important options. 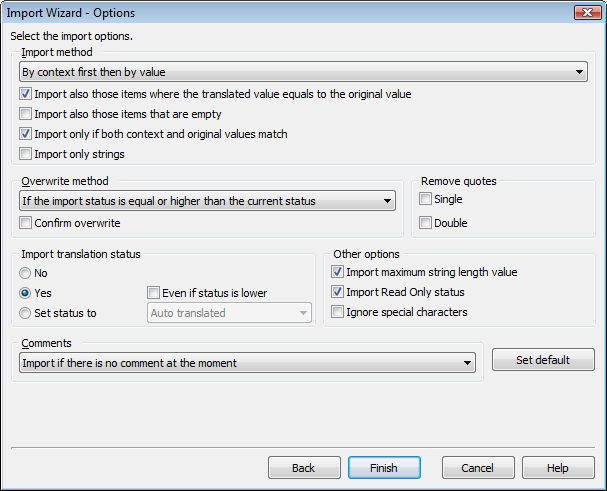 Import also those items where the translated value equals to the original value
Some translations should be identical with identical with originals, for example names or some common captions (e.g. “OK” buttons) in most languages. So you can check this option.

Import only if context and original value match
I recommend checking this option, if you would like get results exact matched with your second (imported) project.

Comments
If your imported project contains translation comments, you can select “Import if there is no comment at the moment” setting, because it allows you import these comments.

Misc
If your second project contains items with “Do Not Translate” status and with maximum string length setting, you should also check following options:

When you are ready, simply click on “Finish” button, and that’s all.